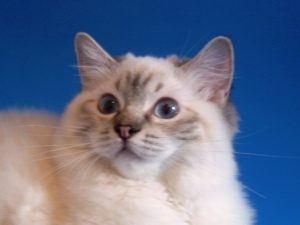 Dec.6th 2010, last weekend we were in the last FIFE show of this year in Spain. It is the before Christmas FIFE show and it is also the largest show FIFE in Spain. There were almost 300 cats at the show. We were there with Eros, Venus and the Eros’s daughter.

Eros is in “full condition”, all the judges told us. He just needed his two last points for his title FIFE Supreme and he did it!!!! Eros is now FIFE Supreme and TICA Supreme!!! but even more…. Eros was the best adult male at the show both days, he got the Best in Show male of all breeds, and after reaching 10 Best in Shows during his FIFE show career , he also got his DSM, Distinguishes Merit Award. He is the first ragdoll in Spain who got this award, and I just know two more ragdolls in Europe… Eros is almost 4 years old and has finished his FIFE show career with the same sweet temperament as he started it when he was 6 months old .

All this city is covered with this poster!

“Eros has already 8 Best in shows, he only needs two ones more to get “Distinguish Merit” FIFE award, no any other ragdoll in Spain has this award, and I only know one in whole Europe. We will try to get it for you, but it is a very hard work. We cross our fingers for Eros.”