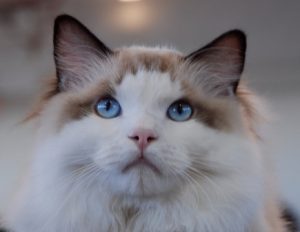 Eros, a seal bicolor male from RW SGC Riterags Cinderella and RW TGC Baron, at just 9 months old, is a TICA Grand Champion after reaching 6 finals (1st, 3rd, 6th, 6th, 7th y 7th) at the International Cat Show held on Málaga (Spain) the 2nd and 3rd of February of 2008. His owners are Luis and Fer from Spain. We congratulate Olympo Dolls on their success with their new baby!!