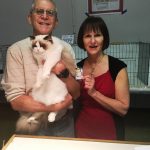 Riterags Insatiable Sadie being shown currently she is a huge seal bicolor girl! two pictures below are her receiving Best at the Inverness Show Dec. 10-12 2016 in Florida! 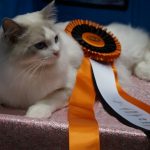 Oct. 10, 2015 at Southern Sophisticats Riterags The Sky’s The Limit, Supremed! Below Rene Knapp giving him his awards! She gave him a catnip toy she gives to her winners and oh wow what an effect it had on him! 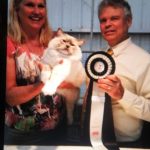 May 30th 2015, at Music City Cat Show, Riterags Rolling on Through AKA “Panzer” receiving His Best from All breed Judge Clint Knapp who has always loved this very big boy! Panzer is a RW Supreme Grand Champion Like his dad OS RW Supreme Riterags Victory and his mom RW Supreme Cinderella. 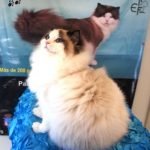 Fabulous seal bicolor Triple Grand Champion Eros Blazer has RW Supreme Cinderella as his Grandmother and his mother is RW Champion Sweet Melody. The cat in the photo is Famous Riterags Eros who is an International Star in FeFe in Europe. They resemble each other don’t you think. 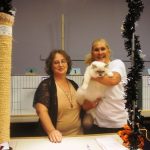 Our very big boy Blue Mitt, Riterags “Rolling on Through” or Panzer, he is here getting a Best from Toni Scarborro, Sat. Oct. 18th 2014

Panzer receiving a best from Clint Knapp at the Destiny Cat Fanciers Show. He is absolutely loving the lime light ? 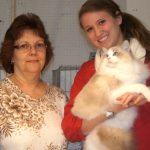 This is a picture of Alonzo receiving an award from Vicki Jo Harrison. He double granded in one show at the Raleigh Show at the beginning of January. Now he is best ragdoll in the South East as a kitten and an adult, He achieved this is 61/2 shows in the final hours of 2014. 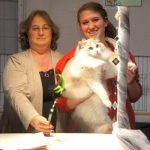 This is beautiful Alonso, Diva’s Son ,receiving an award from Tony Scarborough at the First in Flight Show, in Raleigh, N.C. January 3-6 2014 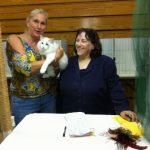 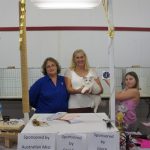 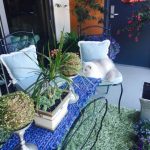