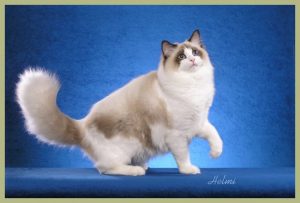 This is Duke, he is a seal bi-color. He is a TICA OS RW Quadruple Grand Champion, Best Seal Bi-color in the Southeast, and third best ragdoll in the Southeast (2003-2004) 13 BEST Longhair cat of the year. As a kitten in 2004 he was second best ragdoll in the South East Region.His Daughter on the right RW Supreme Riterags Cinderella! He has great eye color and a great head and ear set. He is the father of International Winner Diva Doll! His mother is Raggle Dazzle’s Roxie CFA GCH 2003-04 Best Ragdoll. He is a RW Quadruple Grand Champion Duke. His personality is great and he is ALWAYS longing to be held in your arms! He is now an Outstanding Sire!!!